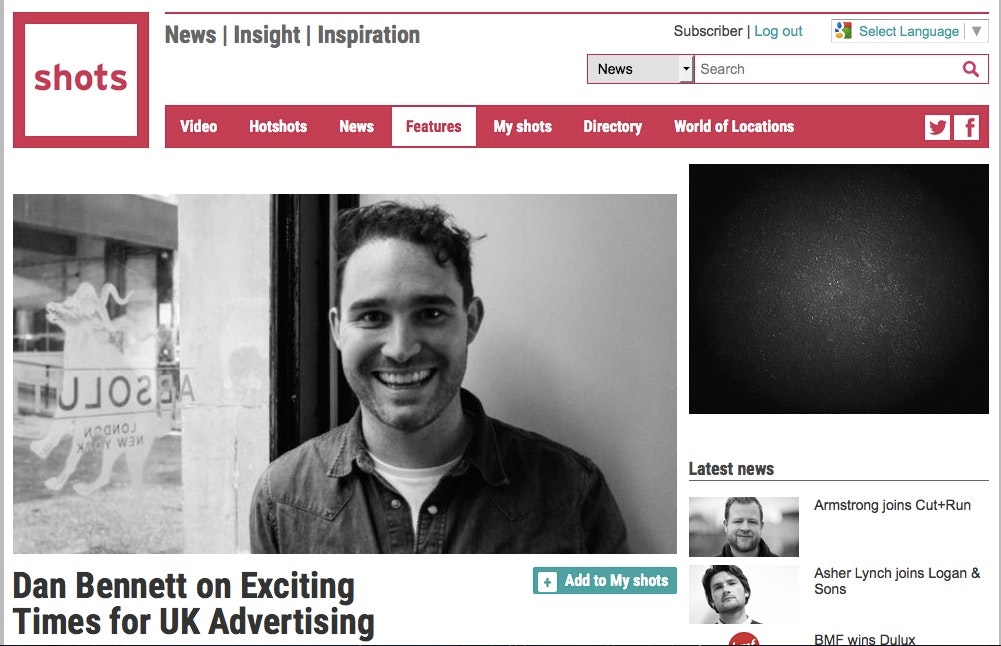 An Interview with Shots

Absolute Post's MD shares his optimism for 2016 and outlines ideas for a better collaborative approach.

"In my opinion, 2015 saw a marked return to confidence from advertisers. It's the first year since the 2008 financial crash that I have seen brands really pushing the envelope when it comes to high level production qualities in creative output. That makes it a very exciting time to be part of the industry in the UK. I'm looking forward to seeing what 2016 has in store.

It was a great year for Absolute, in addition to the visual effects projects we delivered for advertisers, we also created Absolute Film. In 2015 we delivered three feature projects which has enabled us to open our doors to more long form creative work.

I took on the role as managing director in February and It's been a fantastic learning experience, stepping back from the project-based work that kept me busy as exec producer and focussing on the strategic development of the business. It's early days yet, but I think we're moving in the right direction.

For the post production side of the industry, 2016 will offer some huge developments in the way we access and use technology. I'm proud to say that Absolute is one of the first VFX companies to adopt a system that moves all of our creative technology to a remote location. It's our CTRL Centre, and it has enabled us to remove virtually all of our hardware from our Poland Street location, freeing up space for two new colour grading suites scheduled to open very soon. We will see the rest of the industry start to follow suit over the next 12-18 months.

It would be fantastic to see a stronger visual approach from some of the supermarket brands in 2016. The latest Christmas campaign from Sainsbury’s with Mog's Christmas Calamity was a perfect example. The brand together with AMV BBDO and James Rouse produced an excellent film and Sainsbury’s was rewarded with an increase in market share. Give a little love and it will all come back to you.

Saatchi's New Director Showcase at Cannes also really stood out for me. It featured an incredible selection of some of the world’s best "undiscovered" talent and left me feeling impassioned about the creative future of our industry. One particular highlight was Dexter Navy, who we have had the pleasure of working with on several projects this year.

We've seen a significant increase in visual creative output across the spectrum in the UK in 2015. Brands seem to have finally begun to take online content seriously as a major advertising tool, and we have seen a resurgence in the UK independent film and television markets. While the US has been the front runner for a number of years, it seems to me that the UK advertising and production industries are now the leaders in content creation.

I'd like to see a (near) future where we can have free flowing creative discussions between agency, production and post production at the script writing stage. Allowing us to help develop the ideas that continue to push the boundaries of production and visual effects.

We don't know yet what all of 2016 has in store, but with the flow of high level work we've seen in recent months, I think it's going to be an exciting year ahead."