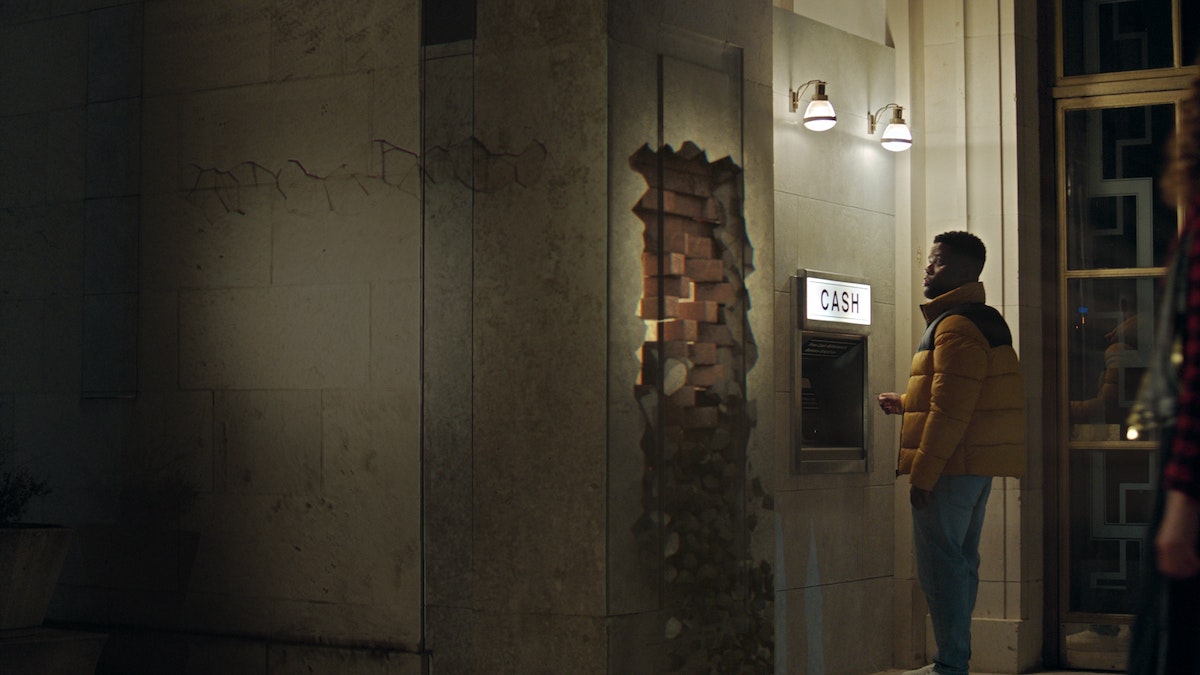 Absolute's animation studio, Blind Pig, are the craft behind The Co-operative Bank’s spectacular new projection project. A catalyst for change, the campaign consists of a 3D animated film, ‘Withdraw From This’, which was projected onto Walthamstow Town Hall and captured in a live action shoot.

In a world where we’ve all become (sadly) accustomed to stock imagery campaigns fighting climate change, Co-op, who remain the only UK bank with a customer-led ethical policy, needed to cut through the noise. The brand deployed scale and craft in their new campaign, which serves as a visual reminder of the terrifying impact of these topics.

Conceived by Dentsu Creative, the film was developed in collaboration between Director, Anthony Rubinstein and Blind Pig Creative Director and Animator, Sean Cooper. The narrative features an unsuspecting customer, who, upon making an ATM withdrawal, witnesses a projected narrative of their cash’s journey. Bricks act as a metaphor for the worrying state of the world, crumbling away to reveal the cash flowing through projected scenes of deforestation, melting ice caps and pollution. Hence, customers feel a tangible connection to the journey, which supports Co-ops messaging since 1992 that: customers get to choose where their money goes.

Aesthetically, the brief was split into two parts, which needed to be fulfilled in tandem to successfully execute the projection. First, the 2.5D layered, stock footage parallax, and second, the 3D crumbling brick wall, which needed to seamlessly merge into the location.

Lead Animator, Sean, had plenty of experience working with live animation, projections, and large-scale digital OOH, including several campaigns on The Piccadilly Lights, but he explains the approach was slightly more complex this time around. “The first major hurdle was planning how we project our crumbling bricks and animations onto a building with multiple surfaces, corners and edges. We also needed to ensure the animations would translate to camera, no matter which angle they were filmed at.”

Faced with the fact that they wouldn’t be able to test their projections until the shoot itself, the team worked off a to-scale 3D building scan. UV maps of each wall surface became flattened textures to work upon, before reprojecting each of these onto the 3D wall in Cinema 4D. “Our biggest challenge was to render the 3D wall destruction from multiple angles. We achieved this by rendering from a camera angle which had been pre-determined by Anthony at the shoot recce, which we then mimicked in Cinema 4D. Next, we flattened this into our UV maps, creating pixel perfect angles which we could project perfectly onto each wall once it came to filming.”

In order to faultlessly replicate the town hall’s brickwork, hi-res imagery of the building was accurately placed into the projection textures. This afforded the team the luxury of destroying individual bricks in the 3D simulation, which would line up perfectly with the physical building.

Sean explains that the textural imperfections of the brickwork helped add authenticity on set: “The projection quality means that we are seeing realistic imperfections which add character to the film, such as light falloff and ambient light. It also helped the extras and actors on the set to react in an immersive and realistic way, in the same way as virtual sets like ‘The Mandalorian’ are being used in large production filming.”

‘Withdraw From This’ runs across TV, VOD and online.