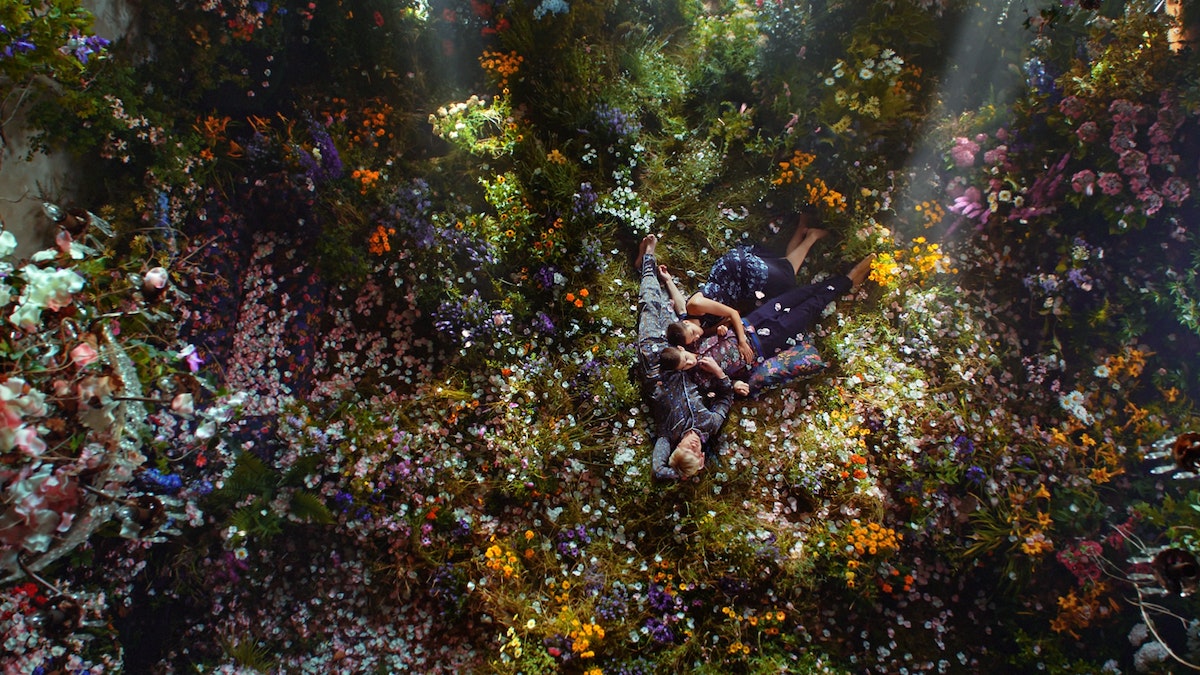 At Absolute Post and BlindPig we’ve been involved with some amazing projects over the years. So, after such a successful summer and a monumental Autumn Winter – we’re absolutely over the moon to be named as No 4 in Televisual’s Top 10 Post Production House ranking for this year. The return of Executive Producer Sally Heath and the introduction of Antoinette de Lisser along with our recent hiring of some talented artists has bolstered our creative output, placing us firmly on the VFX map.

Absolute Post met the Bazmark Films team while working on an independent film in early 2017. The British VFX house quickly became a trusted UK post production partner for Bazmark. This landmark partnership has had terrific results in the new campaign for H&M.

The Erdem x H&M Designer Collection brings Erdem’s signature wildflower blooms and Spring style to the new Autumn collection. That concept was translated to the screen by creating the fictional paradise of Reddham Gardens: an indoor oasis of spring blossom in an Autumnal setting.

Ben Robards, VFX Supervisor at Absolute, says: “After 17 years in post-production, it’s a rare pleasure to be surprised and excited by early storyboards – but as soon as I saw the H&M plan, I was hooked - I love a job where I can collaborate with a high calibre creative team from start to finish. At every stage of pre-production, we were helped by very specific and beautifully-realised briefs which streamlined the entire process.”

The set for Reddham Gardens was built inside an aged stately home: The Grange at Northington. The location was quickly transformed by the team at Biscuit/Bazmark into the stunning crumbling English Manor House that you see on screen.

The interior spring look was brought to life through creative set design by TONY & Academy Award ® winner, Catherine Martin and Art Director, David Lee. Absolute staff were on hand throughout.

Says Robards: “Attending a shoot is so much more important than simply supervising visual effects. It gives the VFX team an invaluable chance to get absorbed in the reality and spirit of the beautifully-evoked world. This time, it also gave us a chance to engage with the production designer, David Lee, whom we'd worked with before (on Carlsberg and Ridley Scott's Prometheus) and the legendary cinematographer Peter Suschitzky, both of whom were keen to help us achieve the best extrapolation of their vision into post-production."

Luhrmann’s script called for the protagonist to have his, “attention arrested by the strange spectacle of autumnal leaves entering through a crude hole in the ornate ceiling” of The Grange. Absolute stepped in to provide a VFX solution for removing the current ceiling and replacing it with a cavity that revealed a detailed and layered surrounding structure.

Absolute CG Artist Huggy Stephens says: “Some of the main challenges were designing the hole and roof degradation prior to the shoot, but keeping a fluid workflow so that we could adapt the look and feeling for the final outcome throughout the process. We researched the actual materials that were originally used to build The Grange and recreated the real ceiling as accurately as possible in CG, including all of the structural beams, tiles and internal structural detail. We then had a lot of fun destroying the heritage site - virtually of course. “

Head of Colour, Matt Turner worked closely with Baz on the grade throughout the post production phase. But rather than follow the usual commercial process, all VFX work was done on the ungraded material so that Matt could develop the grade over a longer period of time.

Matt says: “The H&M grade presented unique conceptual challenges that took me to the limits of the machine’s capability. One shot had over 80 layers of colour correction alone. Working with Baz and his incredible team was a fascinating experience. There was a creative bond between them that can only exist through years of hard work and trust together. Collaborating with the team was both rewarding and creatively satisfying. With more than 100 hours’ grading and finessing, the film came together cohesively over a couple of weeks with Baz’s razor sharp eye and attention to detail. The beauty of the finished article is testament to all involved and I’m exceptionally pleased with how it looks. An extraordinary amount of work went into it and it’s plain for all to see.”

Post-production ran in parallel between New York and London, which allowed Absolute to collaborate directly with NY-based Baz and his team for post-vis and further look-dev during the edit, whilst the CG elements were being worked on back in London.

Ben Robards speaks for all at Absolute when he praises the results. “Looking back, this has been a wonderful opportunity to witness a uniquely artful director at work, and to claim some small credit for this beautiful film. A dream come true.”

This summer we completed a series of commercials for Sony Xperia and McGarrybowen. For the first film, we created photo realistic CG tumbleweeds to combine and complement those shot in camera. Using a blend of simulation and hand animation, texturing, lighting and the compositing of different dust elements to create the final look. The challenge was to find a balance between realism, while keeping the whole scene vibrant and colourful. For ‘Cave’ and ‘Cloud’ we built the scenes within two dimensional environments. Both spots involved multiple plates being composited to create the dynamic final films.

Our sister company and animation studio BlindPig worked with Clarks on their Autumn/Winter campaigns. ‘Nature V’ and 'Trace' are mind blowing spots. In Nature V a shoe is transported into a ‘particle collider’, where it’s accelerated at great velocity before reaching critical speed. It dematerialises down to its very smallest particles, DNA. The DNA then evolves to create the new Nature V high top boot for the winter season. The BlindPig and Absolute teams employed an innovative approach combining Cinema4D and Maya, including X-particles and Houdini to bring this project to life.

It’s not that often we get to work on extended films, so the Ford* spot was an exciting addition to our Summer schedule. The film was conceived as an action trailer for the 'Go Faster' heist movie, starring the Ford Mustang, along with a cast of Ocean's 11 style characters. It even has its own certification and film studio intro. The inimitable style of director Konrad Begg is perfectly matched to the pace and panache that the film evokes. Our VFX crew created set extensions and explosion enhancements to enhance the energetic film.

The new FitBit spots were shot by Archer's Mark Director Ian Derry. The films, helmed by FCB Inferno, include a 45 second version that showcases the new Ionic watch. A series of shorter films, promoted on Facebook and Instagram, dive deeper into the psyche of these everyday athletes. With a grade from Matt Turner and some comping and clean up from the vfx team, the well observed films highlight how the watch is helping wearers prove they’ve still got it.

We were delighted that Havas bought to us their new film for Optrex. Directed by Owen Harris of Outsider, the surreal TV ads purposefully make the viewer feel uneasy. We're immersed in a world where people’s eyes have developed to resemble screens. The final film has been well received achieving commercial of the week in Campaign. Along with the charming spot for E45, starring Olympic Boxer Nicola Adams directed by Finn McGough from Knucklehead

The new spot for Bose from Grey London was a delight to work on. The first execution for Bose ‘Get Feeling Campaign’ features NFL star Larry Fitzgerald. It was directed by Miles Jay at Smuggler and produced by Grey's Senior Producer Tash Bloom. Music is by Oscar winning composer Dustin O’Halloran.

Absolute is set to maintain the momentum as new projects are arriving every day and we’re excited about what 2018 will bring.