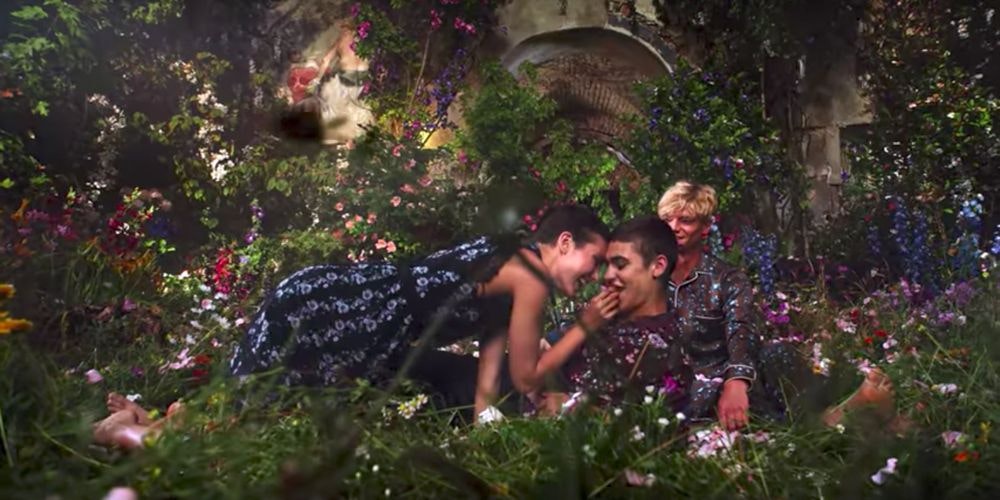 Absolute Post met the Bazmark Films team while working on an independent film in early 2017. The British VFX house quickly became a trusted UK post production partner for Bazmark. This landmark partnership has had terrific results in the new campaign for H&M.

The Erdem x H&M Designer Collection brings Erdem’s signature wildflower blooms and Spring style to the new Autumn collection. That concept was translated to the screen by creating the fictional paradise of Reddham Gardens: an indoor oasis of spring blossom in an Autumnal setting.

Ben Robards, VFX Supervisor at Absolute, says: “After 17 years in post-production, it’s a rare pleasure to be surprised and excited by early storyboards – but as soon as I saw the H&M plan, I was hooked - I love a job where I can collaborate with a high calibre creative team from start to finish. At every stage of pre-production, we were helped by very specific and beautifully-realised briefs which streamlined the entire process.”

The set for Reddham Gardens was built inside an aged stately home: The Grange at Northington. The location was quickly transformed by the team at Biscuit/Bazmark into the stunning crumbling English Manor House that you see on screen.

The interior spring look was brought to life through creative set design by TONY & Academy Award ® winner, Catherine Martin and Art Director, David Lee. Absolute staff were on hand throughout.

Says Robards: “Attending a shoot is so much more important than simply supervising visual effects. It gives the VFX team an invaluable chance to get absorbed in the reality and spirit of the beautifully-evoked world. This time, it also gave us a chance to engage with the production designer, David Lee, whom we'd worked with before (on Carlsberg and Ridley Scott's Prometheus) and the legendary cinematographer Peter Suschitzky, both of whom were keen to help us achieve the best extrapolation of their vision into post-production.

Luhrmann’s script called for the protagonist to have his, “attention arrested by the strange spectacle of autumnal leaves entering through a crude hole in the ornate ceiling” of The Grange. Absolute stepped in to provide a VFX solution for removing the current ceiling and replacing it with a cavity that revealed a detailed and layered surrounding structure.

Absolute CG Artist Huggy Stephens says: “Some of the main challenges were designing the hole and roof degradation prior to the shoot, but keeping a fluid workflow so that we could adapt the look and feeling for the final outcome throughout the process. We researched the actual materials that were originally used to build The Grange and recreated the real ceiling as accurately as possible in CG, including all of the structural beams, tiles and internal structural detail. We then had a lot of fun destroying the heritage site - virtually of course. “

Head of Colour, Matt Turner worked closely with Baz on the grade throughout the post production phase. But rather than follow the usual commercial process, all VFX work was done on the ungraded material so that Matt could develop the grade over a longer period of time.

Matt says: “The H&M grade presented unique conceptual challenges that took me to the limits of the machine’s capability. One shot had over 80 layers of colour correction alone. Working with Baz and his incredible team was a fascinating experience. There was a creative bond between them that can only exist through years of hard work and trust together. Collaborating with the team was both rewarding and creatively satisfying. With more than 100 hours’ grading and finessing, the film came together cohesively over a couple of weeks with Baz’s razor sharp eye and attention to detail. The beauty of the finished article is testament to all involved and I’m exceptionally pleased with how it looks. An extraordinary amount of work went into it and it’s plain for all to see.”

Post-production ran in parallel between New York and London, which allowed Absolute to collaborate directly with NY-based Baz and his team for post-vis and further look-dev during the edit, whilst the CG elements were being worked on back in London.

Ben Robards speaks for all at Absolute when he praises the results. “Looking back, this has been a wonderful opportunity to witness a uniquely artful director at work, and to claim some small credit for this beautiful film. A dream come true.”

The full four minute version of the film will be released at 9am on Wednesday 25th Oct. You will be able to see the Erdem x H&M range in store at H&M from 2nd November 2017, worldwide.

"The Secret Life of Flowers"