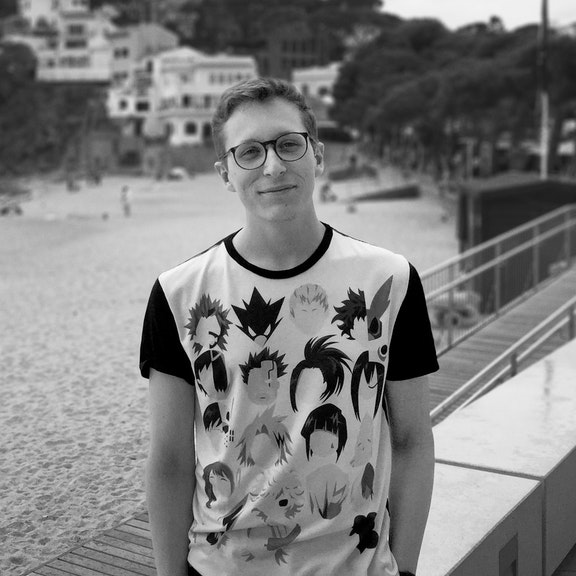 Junior 2D Compositor at Absolute Post, Lucas Warren takes some time to share his experience, inspirations and a bit more about the journey which led him to the VFX industry.

Lucas grew up in North London and his fascination with robots made him think his first job might be as a mad scientist or inventor. However, this interest soon changed once he discovered YouTube and started watching filmmakers create all sorts of weird and wonderful amazing effects, it was then that he started to research the skillset required to pursue a job in the VFX industry.

Lucas remembers graduating from University and says “I knew I wanted to do something in post-production but I wasn’t quite sure what, it was after I went on a trial day at Escape Studios and I saw everything you can do in Nuke and the VFX side of the film and tv pipeline, I was sold!”.

Lucas went on to take his first job as an intern at Fluid Pictures where he spent 4 months gaining more experience and insight in to the VFX world, “it was good fun and I still remember working on some spooky shots for the TV documentary series, Paranormal Witness...”.

Lucas joined Absolute in November 2018 and has recently worked on numerous exciting projects including a TV campaign for Senokot, an online film for Maserati as well as on the historical TV drama Outlander, Season 5.

He explains that “when working with the rest of the CG and 2D teams on Senokot, there was a fair amount of CG compositing to be done on the statue and one of my shots was the statue frozen in the park at night and this involved re-timing the streetlamp, cleaning up the road, all of the shadows and colour correction on the grass”.

With Maserati, Lucas says that “everything was pretty stylized, so we got to play around with adding loads of different elements such as lightning, fog and volumetrics, due to this, there wasn’t one shot as such that I had ownership of, but I helped to match CG passes to the car interior shots, add reflections to the scene, and the all-important sparks!”

Another really interesting project which Lucas says is one of the highlights of his career to date, was the work that he did for Adidas GMR, which he had the chance to work on from start to finish. He says the ‘mad’ style made it super fun and interesting, “GMR had a tonne of cool effects, one of which was the opening shot, which I had to mock-up an entirely new background for the exterior, and make sure the lighting matched to the interior. I also cleaned up some lines from the ground and added a CG ball. Another shot I worked on was the tunnel shot, which was built for real but needed extending in post...”.

When asked what he enjoys most about his job, Lucas explains “I love working with all of the talented people at Absolute and getting the opportunity to constantly learn new things to make me a better artist. As I’ve discovered over the last couple of years, a huge part of creating VFX is problem solving, which is super satisfying when you get it right.”

When discussing inspiration and collaboration, Lucas talks passionately about Hugo Guerra, “I’ve been following him for a while now and I think it’d be cool to work with him to create more video game inspired work”. He’s also a massive fan of Stanley Kubrick and the sci-fi genre, so ‘2001 A Space Odyssey’ will always be a huge source of inspiration for him.

Finally, when asked about what advice he might give to someone starting out in the industry, today, he offered the following, “You have to be your hardest critic, because it’s the only way you’re going to improve...”.

For more information on working with Lucas and all the other brilliant artists at Absolute, please contact producers.ldn@absolutepost.com